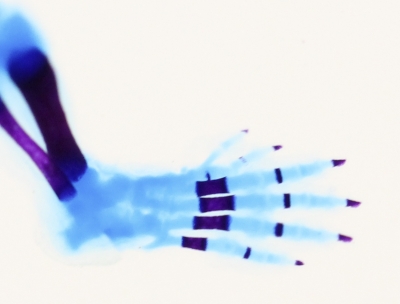 The fact that most humans have five digits on each hand and foot is due in part to a complex developmental pathway called Hedgehog. If something goes wrong in this process during development, say a mutation in a critical gene that affects itsexpression, a person might be born with extra fingers or toes, a condition known as polydactyly. New research shows that for at least one part of the pathway, there is a sort of failsafe mechanism that seems to make it harder for mistakes to happen.

The Vokes Lab researches the genetic causes of polydactyly, pictured in a mouse foot above. Polydactyly is a condition where an individual has an extra finger or toe on a limb.
The process for forming digits in a developing embryo involves a long cascade of chemical signals, like a series of falling dominos. In one part of the series, special proteins called Gli transcription factors bind to specific regions on DNA, controlling the expression of dozens of target genes that mediate digit formation.

Steven Vokes, an assistant professor in the Department of Molecular Biosciences in the College of Natural Sciences, has discovered that for one of these critical Hedgehog target genes, called Gremlin, there are two or more independent DNA binding regions by which Gli proteins control its expression. The study appears in the May 14 edition of the journal Development: http://dev.biologists.org/content/141/9/1906.long

Using mice as an experimental model, the research team discovered that when they deleted a known DNA binding site for Gli, the gene was still expressed correctly, which left them puzzled. Additional genetic experiments then indicated that the lack of response was due to the presence of additional Gli binding sites that also control Gremlin. Vokes says these additional sites provide redundant regulatory mechanisms, which make it harder for the Gremlin gene to be misexpressed and subsequently harder for extra digits to develop.

“Right now we don’t really know the reason for this so all we can do is speculate,” he says. “By having multiple ways it can be regulated that can each work independently of each other, it essentially makes the regulation of Gremlin more robust.”

Vokes speculates that wild mice are more genetically diverse and have many more mutations than laboratory mice, some with potentially negative impacts, and that having more than one way to regulate this gene may come in handy during development.

Although a similar phenomenon has been observed for the regulation of certain genes in flies, this is the first suggestion that such a redundancy may also occur in vertebrates. In addition to regulating digit formation, the Hedgehog pathway also regulates dozens of other processes including the development of the face and brain and several cancers. Vokes says it’s easier to study and observe digits but the mechanism suggested by this research may also occur as a common feature of Hedgehog-mediated gene regulation.